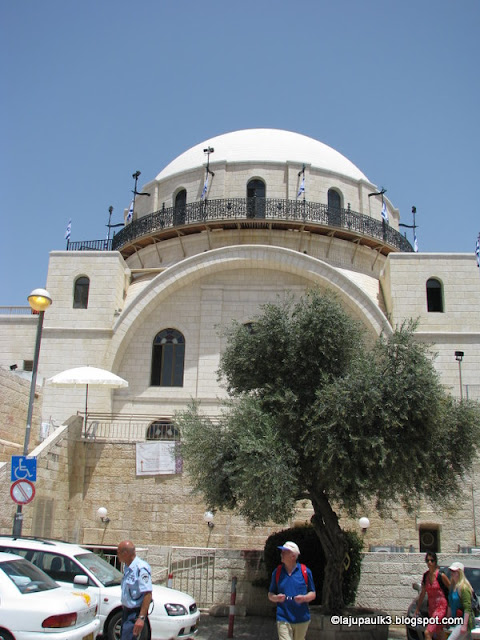 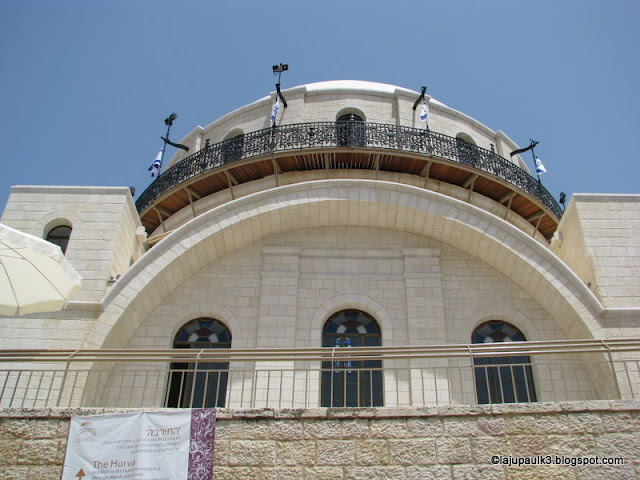 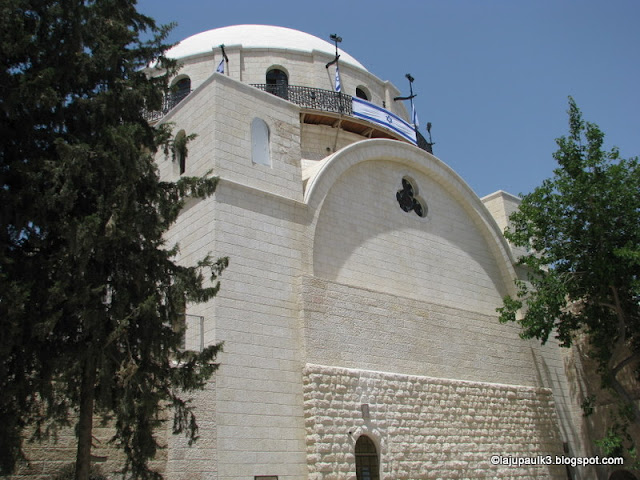 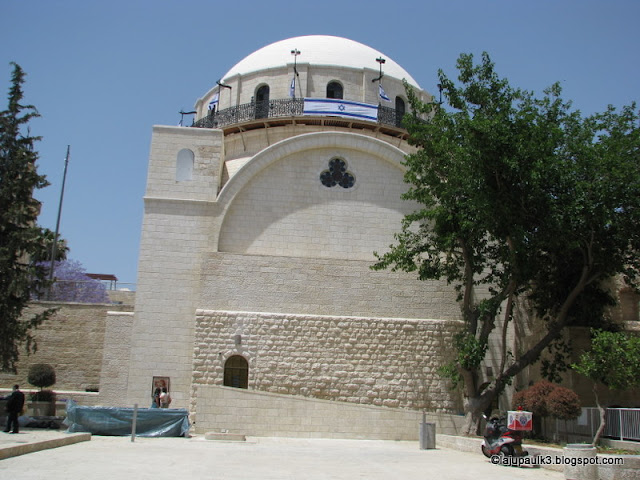 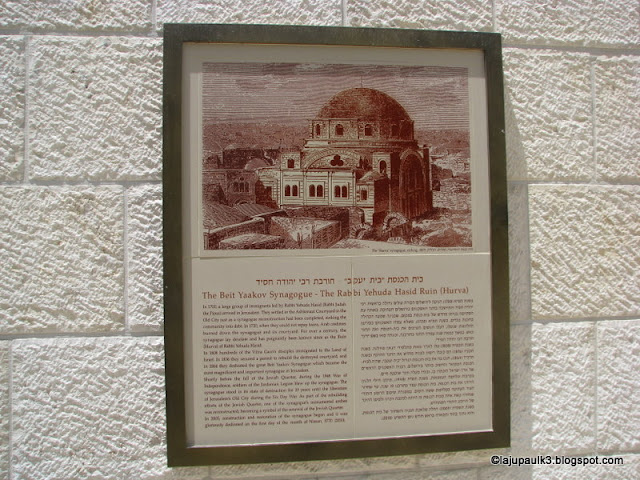 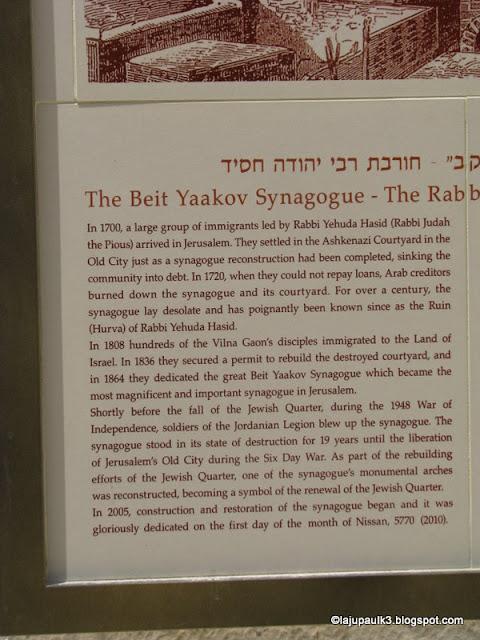 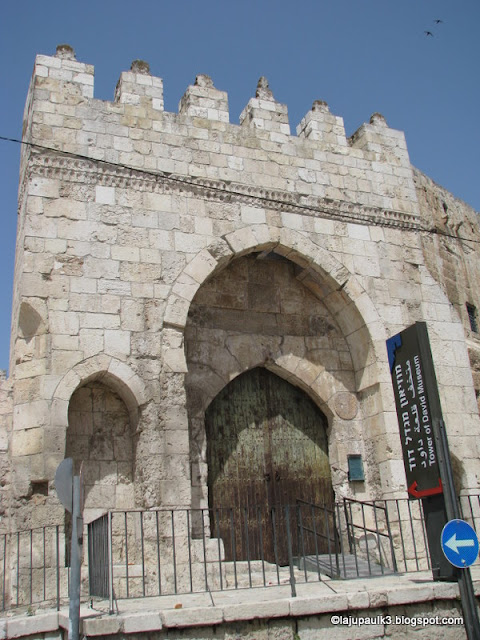 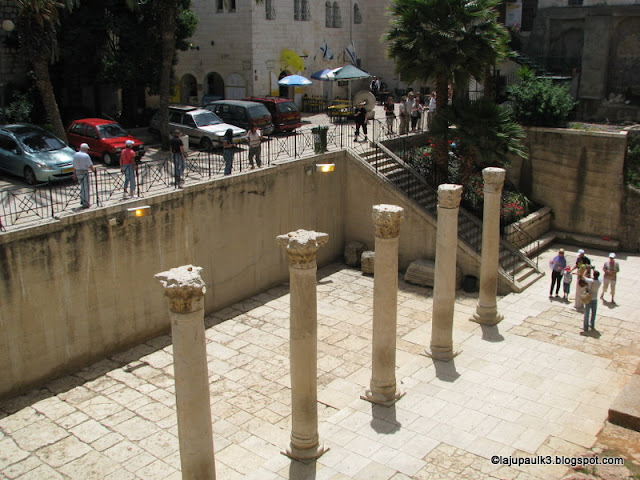 The Walls of Jeusalem-near Zion Gate. 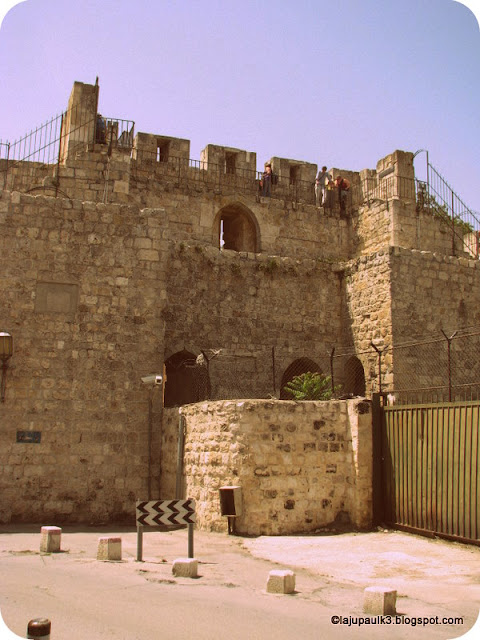 'Convent of the Olive Tree’ or 'Monastery of Holy Archangels’: Armenian Quarter, Jerusalem. The traditional (Armenian) site for the house of Annas, who judged Jesus (John 18: 13: Mark 15:15). The venue is opened for the tourists (non-Armenians) only once in a year at the time of Good Friday.

The ‘Armenian Quarter’ inside the Old City of Jerusalem is relatively less explored, in large part due to restrictions imposed on non-Armenians. One such venue is a medieval convent, which reputedly holds a few relics associated with the passion of Christ. Known as ‘the Convent of the Olive Tree’ or ‘Deir-el-Zeituneh’ or ‘the Monastery of Holy Archangels’, the site according to Armenian traditions is the house of Annas who was involved in the trial of Jesus (John 18: 13: Mark 15:15). Another tradition is that the convent stands on the threshing floor of ‘Araunah the Jebusite,’ where David saw the angel of the God standing between heaven and earth, with a naked sword in his hand stretched out against Jerusalem (2 Samuel 24:16-17; I Chronicles 21:15-16). The foundation of the convent was laid by Queen Helen in 4th century AD and remained unknown to non-Armenians until 7th century. It was renovated in the year 1286 by the Armenian King Levon III. Armenians also have the ‘House of Caiaphas,’ (the High Priest who judged Christ), outside the Zion Gate, known as the ‘Holy Savior Monastery’.
The ‘Convent of the Olive Tree,’ is difficult to access and the door at the entrance will be seen closed most of the times. Main entrance to the convent is deep inside the Armenian Quarter, south-east of the St. James Cathedral and positioned at the end of a typical cobbled street of the Old City of Jerusalem. There is also an entrance from the Armenian Museum, which is also blocked to non- Armenians. I was told by the officials at the St. James Cathedral that special permission needs to be arranged to enter the monastery compound as it was opened for the public only once in a year at the time of Good Friday.  The only other option is to seek the help of an Armenian guide. I had tried a couple of times to access the compound, but didn’t succeed until I met George an Armenian who runs a shop near Zion Gate. While we bought some Armenian pottery and ceramics, I had a casual discussion with George about their ancient and unique community living inside Jerusalem. I shared my wish with him to see the sacred olive tree inside the convent and asked if he could help us. He was not only kind to lead us to the tree but also went out of the way to leave the shop to accompany us. With an Armenian on our side, the gates were opened and we were let in without any restriction. The following photographs are not possible without George’s helping hand and generosity. 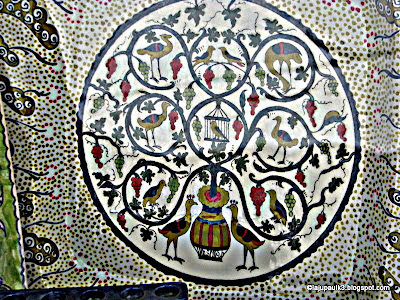 Armenian Ceramic
What to see
Inside the convent is a chapel associated with the flagellation of Christ and a prison where Jesus is said to be held before the judgment under Annas. Another interesting artifact in the convent is a beautifully carved wooden door dated to 1649.  In the compound of the monastery lie two unique relics:
Sacred olive tree:  believed to be the tree to which Christ was fastened during his trial under Annas. On Good Friday, special ceremonies are held at the tree. The parapet surrounding the tree has many khatchkars-medieval Armenian pilgrim crosses carved on stones. “When the Lord was brought to the presence of the high priest Annas for trial, he was busy with another trial, so they tied Christ to the nearby olive tree and then imprisoned Him. This olive tree has been sacred ever since the earliest Christian centuries and has been the object of reverence for pilgrims. Special care is taken of the tree and new shoots grow from its roots. Archbishop Malachia Ormanyan relates that on the evening of Good Friday, the faithful come to this place and a special ceremony is held there. The fruits of the tree are gathered while spiritual songs and hymns are sung and with the stone of the fruit (olive pits) rosaries are prepared which are spread by the pilgrims everywhere (Armenian Jerusalem, 1931, p. 128). The fruits and stones of this tree are miraculous. Miracles are told related to barren women and those suffering from high fever” (Texts from the Armenian Patriarchate site here).
The Hosanna Stone: a column with cracks resembling the mouth of a human being. According to Armenian traditions, the cracks emerged in the stone when Pharisees asked the disciples to stop shouting Hosanna to Jesus at his triumphant entry to Jerusalem during ‘Palm Sunday’. The stone has been linked with Jesus’ answer given to the Pharisees: “And he answered and said unto them, I tell you that, if these should hold their peace, the stones would immediately cry out (Luke 19: 40).” Another legend is that the cavity was made by Jesus’ elbow as his body jerked at the pain of the first lash. Father Jerome Murphy O’ Connor has written about this unique column in ‘The Holy Land: An Oxford Archaeological Guide’ (p. 73) as, “Built into its outer wall is a relic that immediately arouses suspicion but which no one can ever prove false”. Unfortunately, I was not aware about this stone at the time of my visit and missed the rare opportunity to photograph.
Posted by Laju Paul K4 at 3:24 PM 2 comments:

Entrances to the 'Convent of the Olive Tree’, Armenian Quarter-Jerusalem. 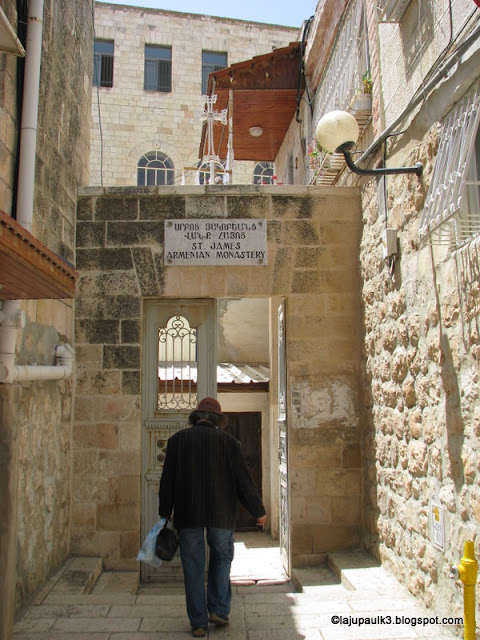 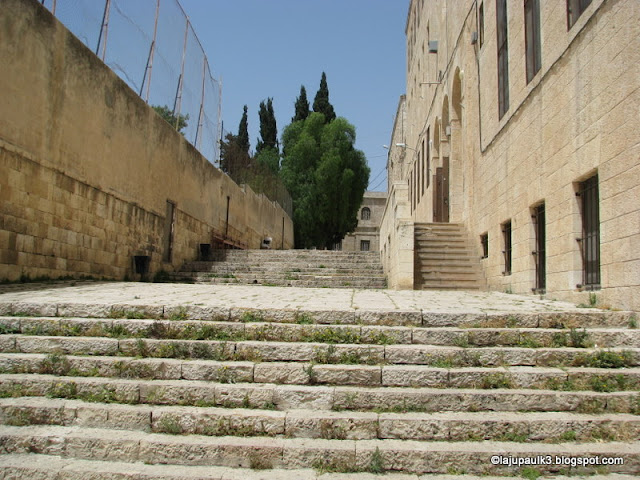 The Sacred Olive Tree of the '‘the Monastery of Holy Archangels’- The traditional (Armenian) olive tree where Jesus was tied during the trial under Annas. 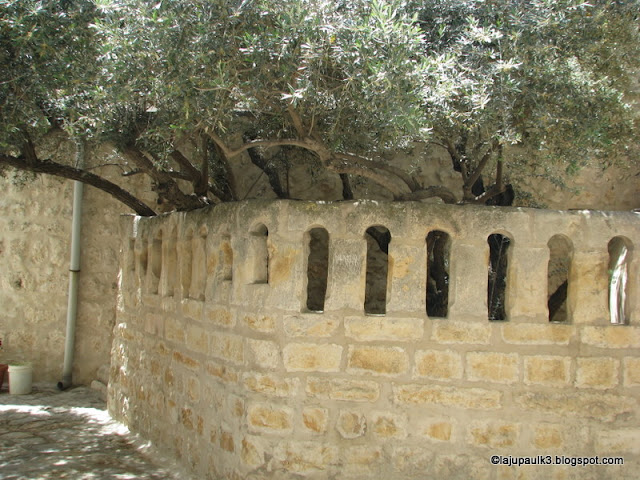 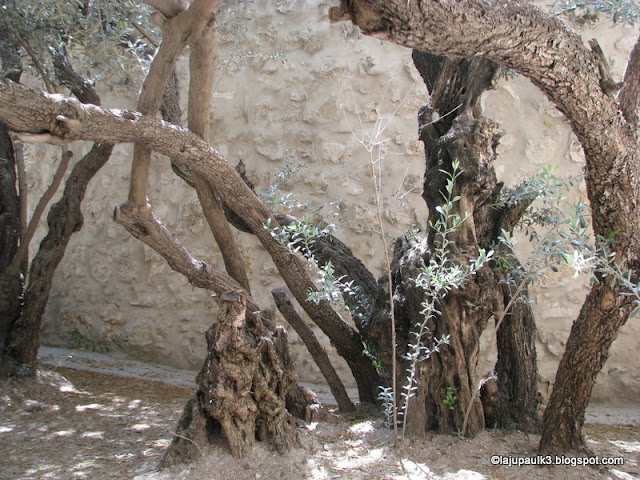 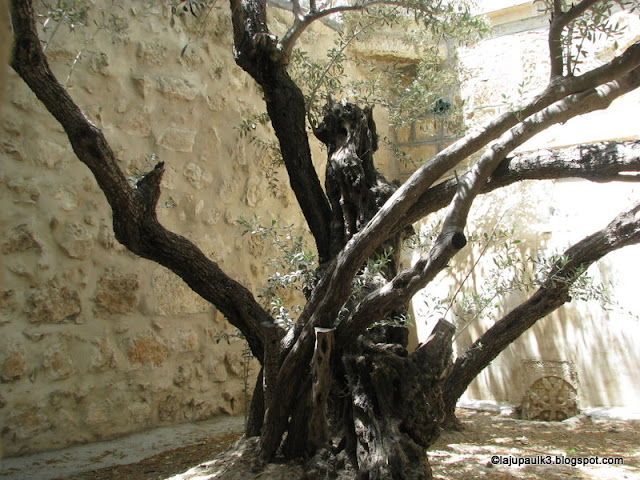 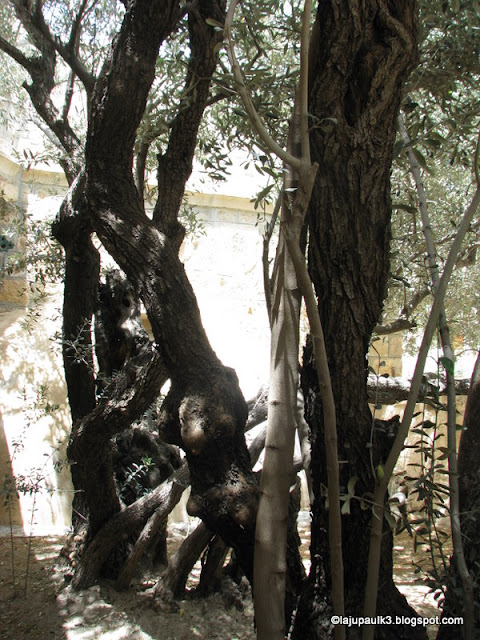 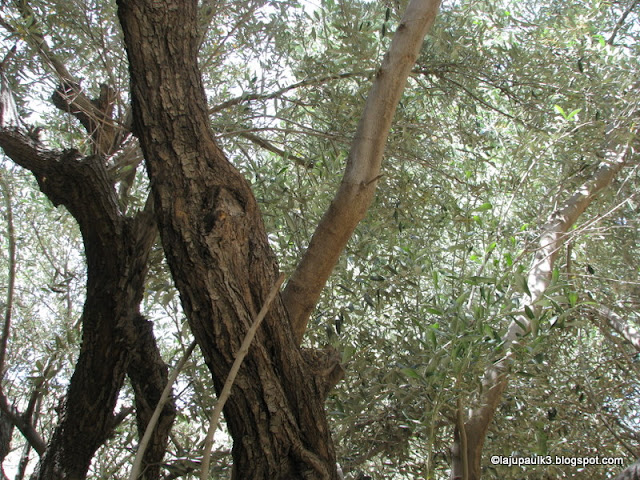 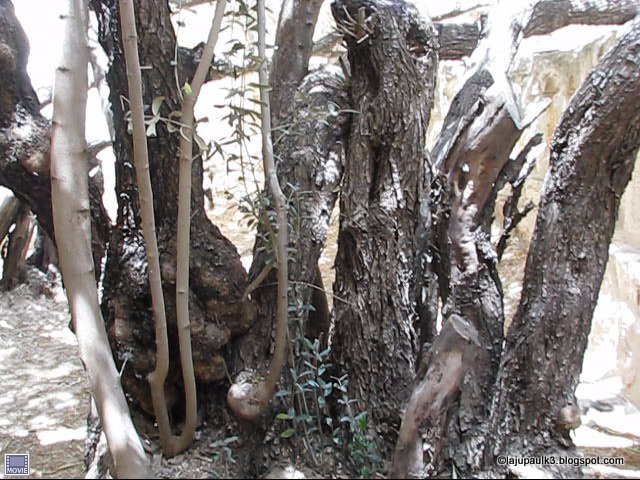 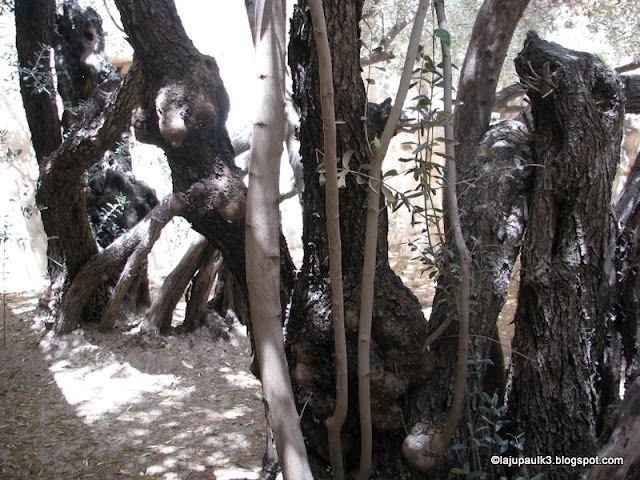 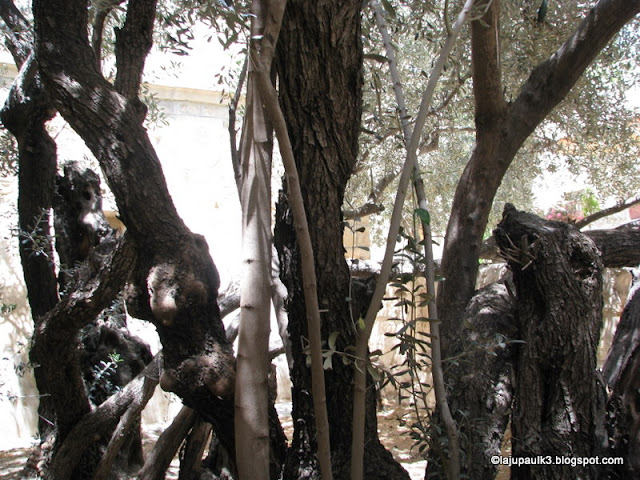 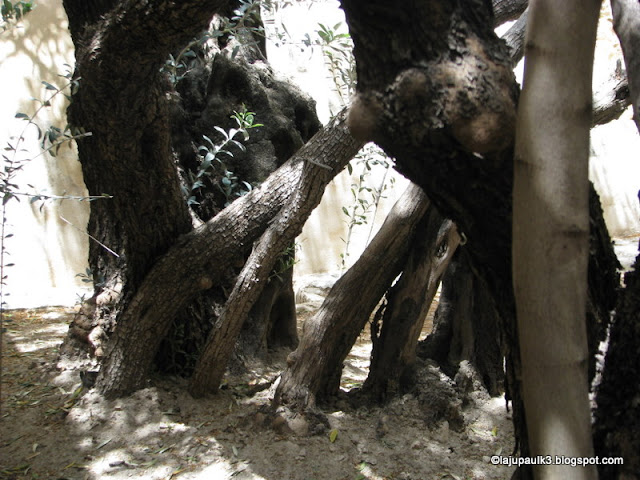 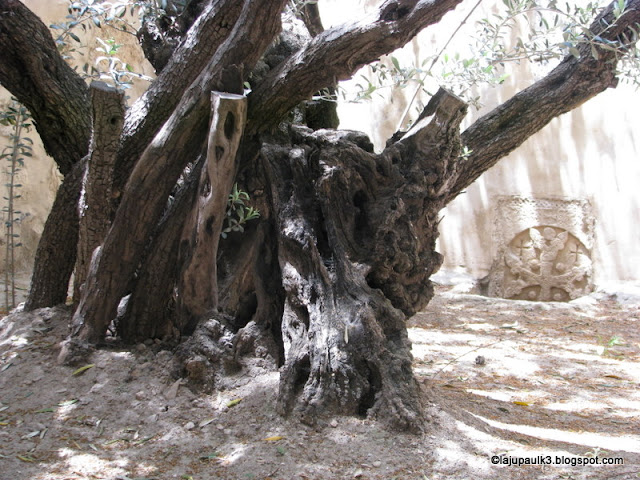 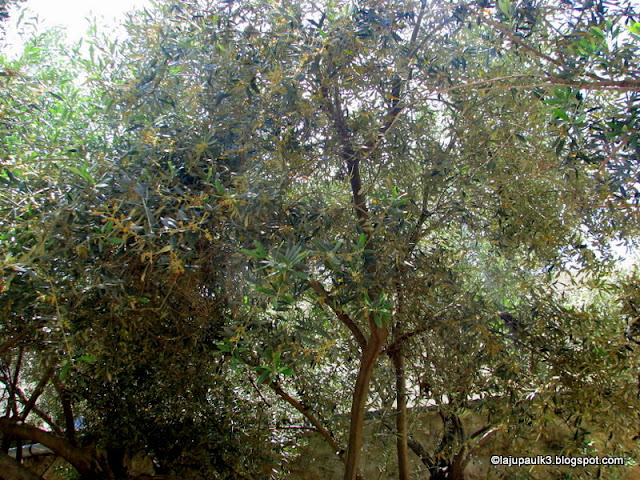 Khatchkars (Medieval Armenian Pilgrim Crosses) from ‘the Convent of the Olive Tree', Jerusalem. 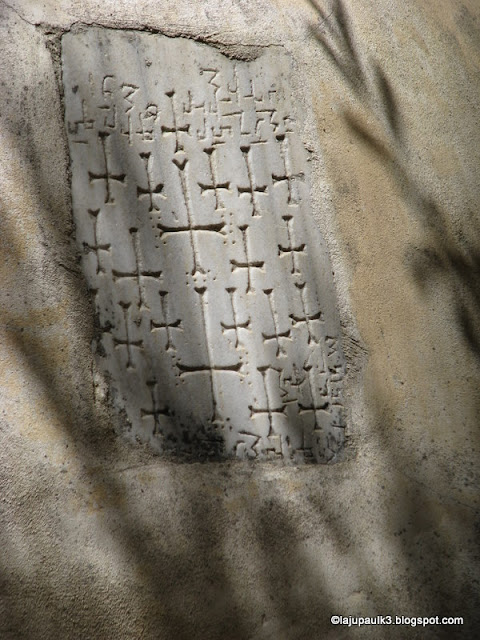 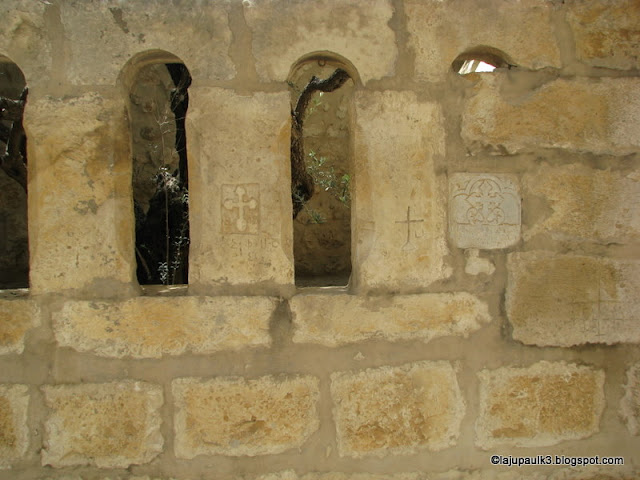 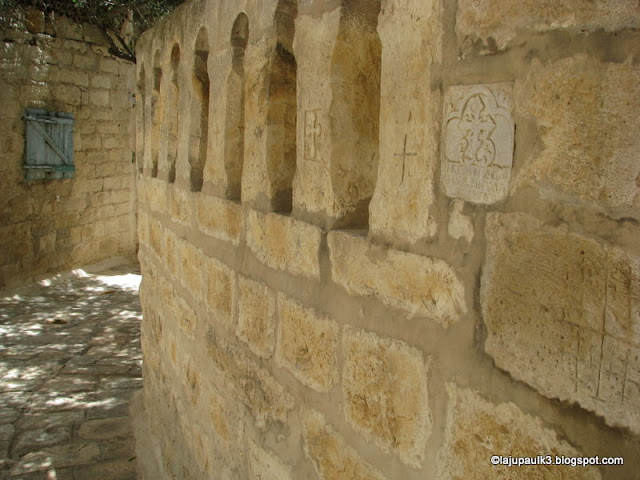 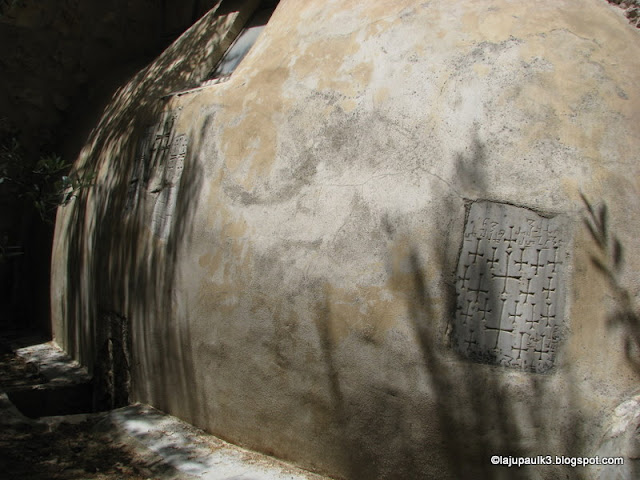 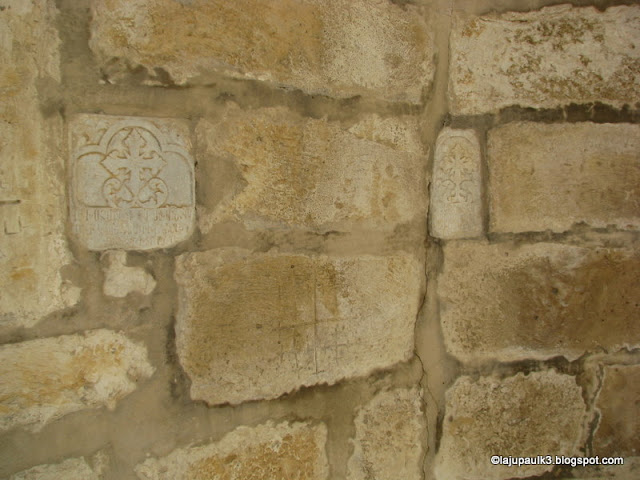