6. The Syriac Orthodox Chapel of St Joseph of Arimathea and St Nicodemus 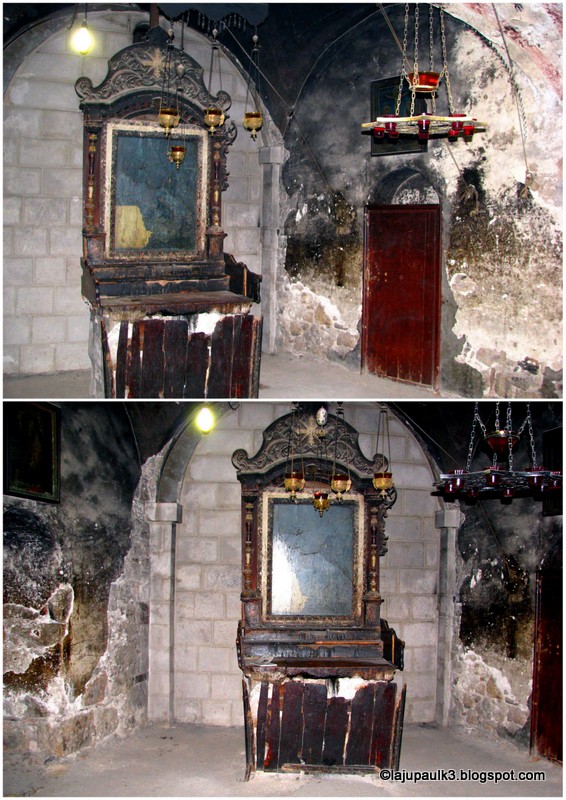 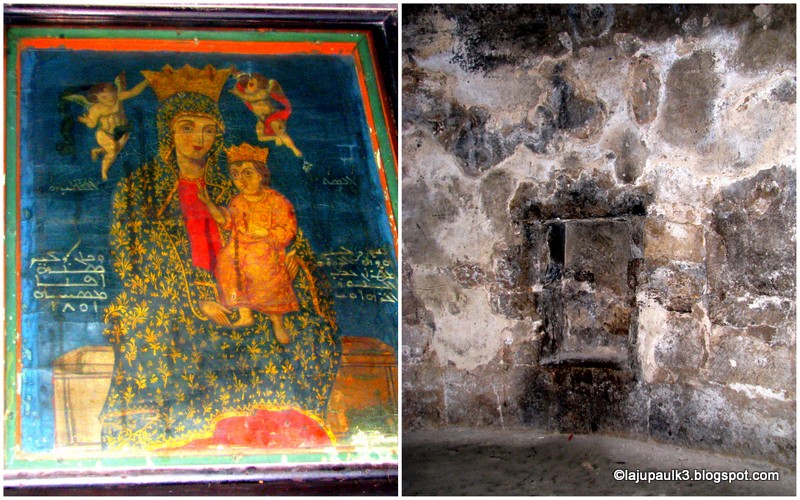 This poorly maintained chapel is used by the Syriac Orthodox group, one of the six communities that control the Holy Sepulcher Church. It's dilapidated condition is mainly due to the conflict between the Syrians and the Armenians over the ownership of the room. The Syriac Orthodox Metropolitan celebrates mass here on every Sunday. Note the Syriac writings on the painting of the Virgin Mary with Jesus.The chapel preserves one of the oldest parts of the church in the form of first century tombs from the time of Jesus.

Location. Just behind (west) the Holy Sepulcher or Tomb of Jesus (Edicule) and the Coptic Orthodox Chapel.

5. The 'Tombs of Joseph of Arimathea and Nicodemus' (1st Century AD) 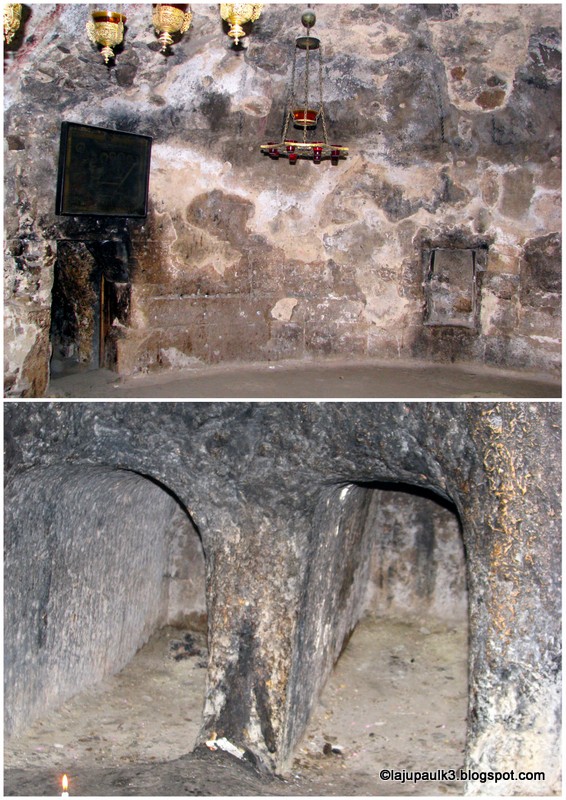 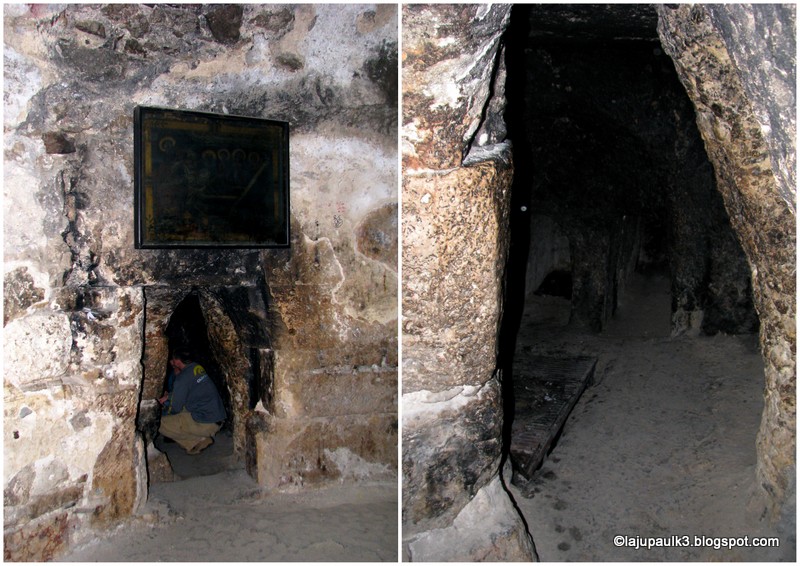 According to the Gospel of Mathew, Joseph of Arimathea offered his own tomb to Jesus: "And when Joseph had taken the body, he wrapped it in a clean linen cloth, And laid it in his own new tomb, which he had hewn out in the rock: and he rolled a great stone to the door of the sepulchre, and departed" (27:59-60). As per tradition, both Joseph of Arimathea and Nicodemus who had arranged the burial of  Jesus was later interred in these tombs, not far from the tomb of their master.

These first-century tombs preserved inside the Church of Holy Sepulcher indicate that the place was used as a burial area at the time of Jesus. Since New Testament (Hebrew 13:12) says Golgotha was outside the walls of Jerusalem and Jews always buried their dead outside the city, these tombs could validate the authenticity of the Church of Holy Sepulcher's claim of being the traditional crucifixion site.

Location: Look for the Syriac Orthodox Chapel of St Joseph of Arimathea and St Nicodemus, a dark and dilapidated room back (west) to the edicule (traditional Tomb of Jesus Christ) and opposite to the Coptic Chapel. The tombs are on the far side of the chapel and usually lit with candles inside.

4. The Tomb of Pharoah's Daughter (9th-7th Century BC) 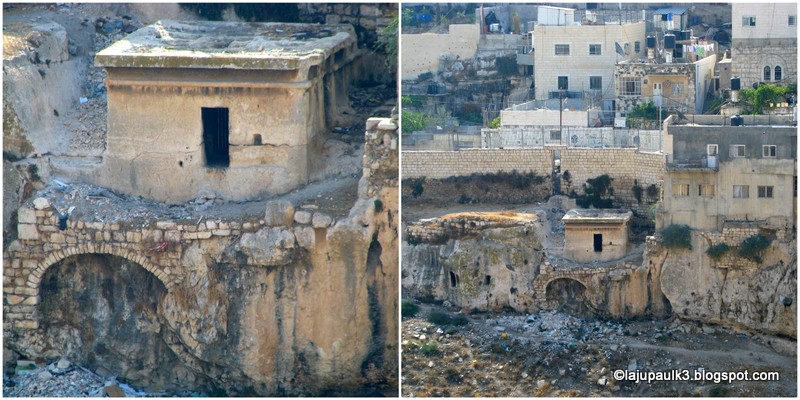 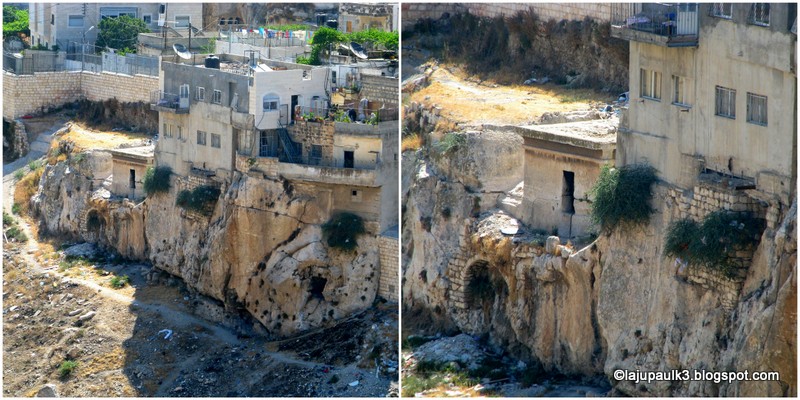 One of the most complete tombs from the First Temple Period. Mistakenly identified as the tomb of King Solomon's wife, the daughter of Pharoah (1 Kings 3:1, 9:16). The tomb was hewn out of a single rock (monolith) and originally had a pyramid shaped roof top which was destroyed in the Roman era. There was an ancient Hebrew inscription in the upper left corner of the entrance, but now only two letters remain.

Location: Opposite to the City of David, in the Israeli-Arab village of Silwan.

Accessibility: Lies in a highly neglected state and not a friendly atmosphere to explore the site. 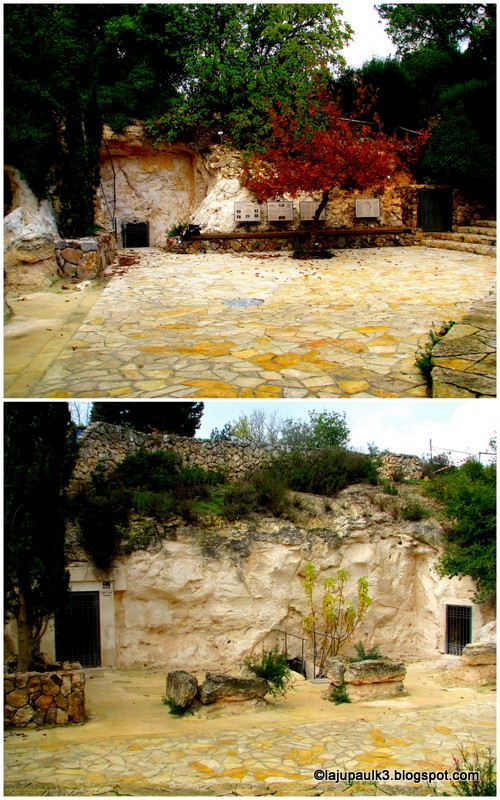 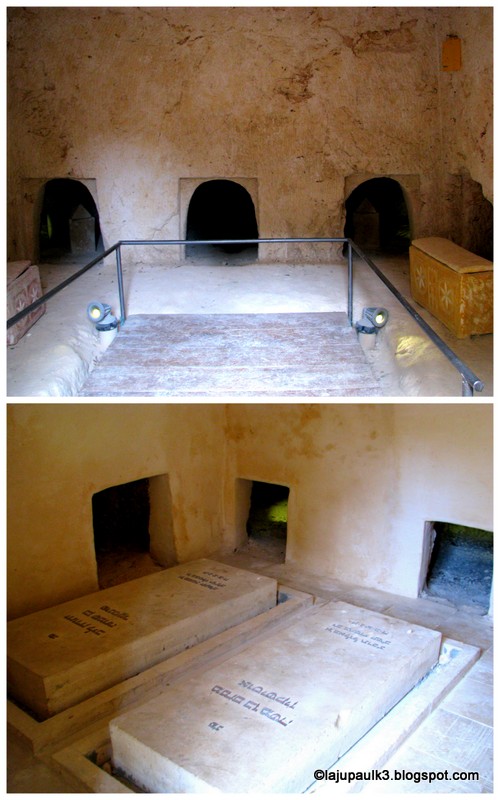 Nicanor was a wealthy Alexandrian Jew from Second Temple Period who donated the famous Eastern Gate of Jerusalem Temple. Known as the 'Nicanor Gate', it was made of bronze and was miraculously brought to Jerusalem from Egypt. For some it is the 'Beautiful Gate' of Acts 3:2 where the lame man was  begging when Peter and John met him. The modern tombs inside belong to Zionist leaders Leon Pinsker (d. 1891) and Menachem Ussishkin (1941).

2. The Tomb of Simeon the Just or Kever Shimon HaTzadik. 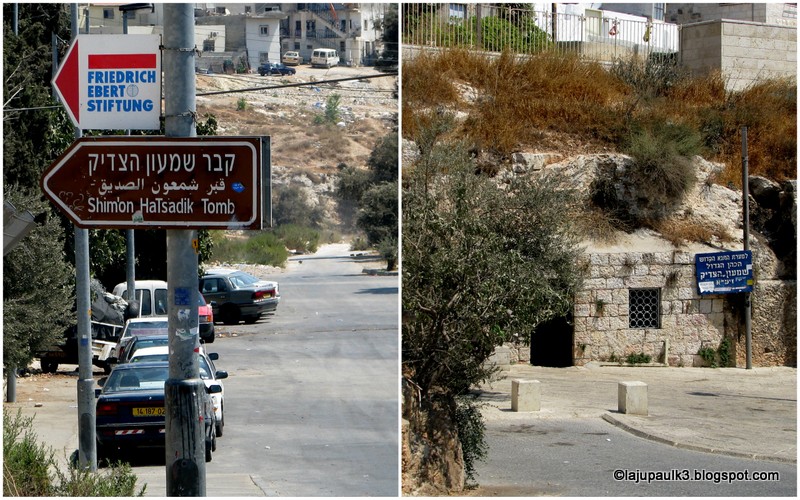 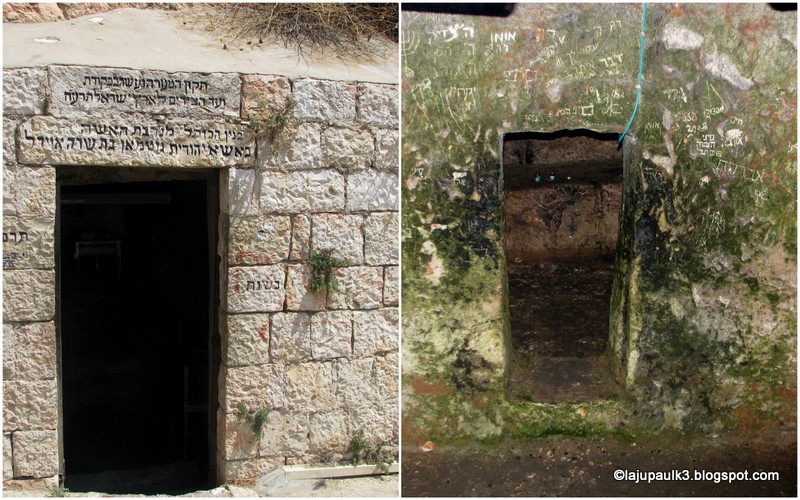 Simeon the Just was a 4th Century BC Jewish High Priest revered for his piety. The earliest documented evidence for this tomb is from 13th century AD. I am not sure if the tomb is easily accessible for tourists. 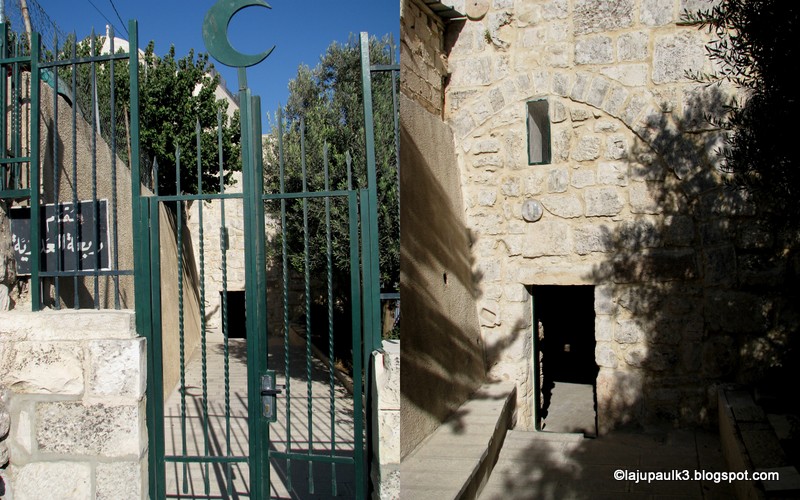 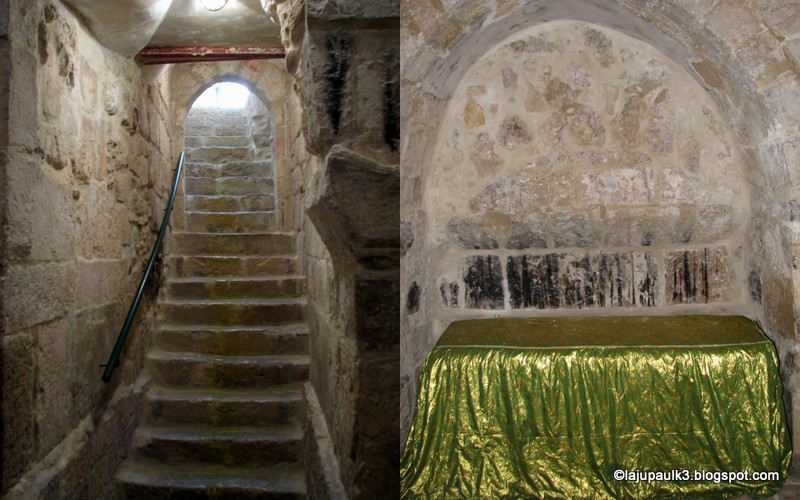 
Location: At Rub'a El Adawiya Road on the summit of Mount of Olives between Pater Noster Church and Mosque of Ascension.


Accessibility: via special permission from caretakers of Mosque of Ascension, Mount of Olives,

WISH I HAD BEEN THERE, BUT COULDN'T!

In my last post, I discussed about the sites in Jerusalem that I couldn’t access due to mainly unavoidable reasons. If I am to pick 20 sites now, I would go for the following (but not in any specific order).

1) Interior of the 'Dome of the Rock’ (Foundation stone) and Al-Aqsa Mosque (Solomon Stables)-The Temple Mount. (Only Muslims are allowed)

5) The Belz Great Synagogue (largest synagogue in the world)

6) The 1st Century Tomb of Kings/Queen Helena of Adiabene (one of the largest and beautiful tombs in Jerusalem)-was very difficult to even reach the caretakers, forget permission!

7) Jason's Tomb from Maccabean Period, 2nd century BC (open only on Mondays and Thursdays for a few hours)

9) The Armenian Bird Mosaic, near the Damascus Gate (5th-6th century AD)-I was unable to locate.

11) The ‘Quarry of Herod’ near Ramat Shlomo (supplied the giant stones for the building of the Temple Mount)-not sure if it is open to the public.

12) The Armenian church St. Saviour (the house of Caiaphas), Mount Zion (courtyard with beautiful blue Armenian ceramics)-no access for public at least when I was in Israel.

13) The Greek Orthodox Church St. John the Baptist, Christian Quarter (one of the oldest churches in Jerusalem)-permission to be arranged from Greek Orthodox Patriarchate.

14) The Greek Orthodox Monastery of Onuphrius (traditional site of Akeldama, where Judas hanged himself)-was satisfied with the external view.

15) The Rockefeller Archaeological Museum (I regret for not visiting...plus the no photography policy in Israel Museums)

16) The Edward and Helen Mardigian Museum of Armenian Art and History of Jerusalem (was under renovation for long time, not sure if open now)

18) View from the tower of Russian Orthodox Church of Ascension, top of 'Mount of Olives' (open only once in a year for public, that is on the  'Ascension Day', 40 days after Easter)